ECG is advocating a standard minimum loaded length for car transporters in Europe of at least 20.75m as soon as possible to harmonise many of the existing national laws. The benefits of such a harmonisation will go beyond the car logistics sector and the internal market.

The authorised loaded length on national roads is often longer than that and in a majority of Member States car transporters have a special recognition in the law and thus specific and longer allowable loaded lengths.

To put an end to inconsistent approaches by Member States and the resulting negative impact on the environment, ECG recommends amending Directive 2015/719 and establishing a standard minimum loaded length for car transporters in Europe of at least 20.75m as soon as possible.

The harmonisation of the minimum loaded length of car transporters will result in saving CO2 and other benefits which are described in ECG’s position paper below.

ECG’s has advocated for many years for the harmonisation of loaded length of vehicle carriers at EU level to at least 20.75m.

Since 2016 ECG publishes and updates regularly its outstanding booklet on national legislation for car transporters collecting all pieces of legislation on the topic in original language and translated into English. This provides a living and tangible example of the patchwork of different rules existing in this area across EU Member States which operators have to comply with. It could be easier than this. ECG members operating vehicle carriers do not currently operate in a single market and cannot be as efficient as they would because of this legislative potpourri. 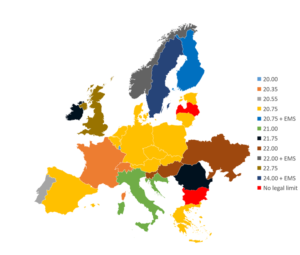 Rules on weights and dimensions allowed at EU level are set out in Council Directive 96/53/EC (W&D Directive) and the last revision entered into force in 2015. Specifically, the W&D sets unloaded length of road trains like car transporters to 18.75m at EU level. In 2013 and 2014, ECG had meetings and exchanges with EU officials from the Parliament and the Commission and with representatives from Transport Ministries of Member States to promote the  harmonisation of loaded length. At the time, it was noticeably clear, and all the parties understood why the sector needed harmonisation to operate in a single market. However, due to the complexity of the Directive touching upon different areas, loaded length could not be solved as one of the priority items in that revision round. Nonetheless, ECG managed to have a clause included in the text of the Directive stating that the Commission would make a revision after 5 years of the entry into force of the Directive.

The clause was triggered in May 2020 when the Commission appointed a consultancy to conduct a study on the impact of the revised Directive on certain sectors such as vehicle carriers. ECG has been ready to once more advocate for its position. In a paper, based on market studies carried out by ECG, we illustrated the benefits of the harmonisation. These were presented to the consultants who could not deny their support to our industry and advised the Commission that Directive should be revised with regard to loaded length of car carriers.

In January 2022 the Commission officially kicked off the process of revision of the Directive and published a call for evidence specifically mentioning loaded length of vehicle carries. This has never happened before and is a big success for ECG and confirms the legitimacy of our position. We promptly submitted a response, once more explaining the benefits of loaded length harmonisation and were supported by a remarkable number of individual responses of ECG members.

After the general call for evidence, ECG has now one last chance to reach its objective for its members as the public consultation on the W&D Directive has just been published. This is a detailed call for input where the Commission will gather feedback from many different sectors.

The EU’s objectives set out in the Green Deal and the Fit for 55 package aim at revising all relevant legislation to allow the EU to become net zero emission by 2050. The W&D Directive is one of these. Our sector could be more efficient, save emissions and operate in an international European market where there is legal certainty when crossing borders. ECG has one last chance to reach harmonisation and will continue its campaign in the coming months.

The public consultation will be open until 19 July and the Commission is expected the make its proposal on the revision at the beginning of 2023. We invite all of our members to reply to the consultation and support us.

Please contact Andreea Serbu for any questions you may have on the issue and how we can support you.